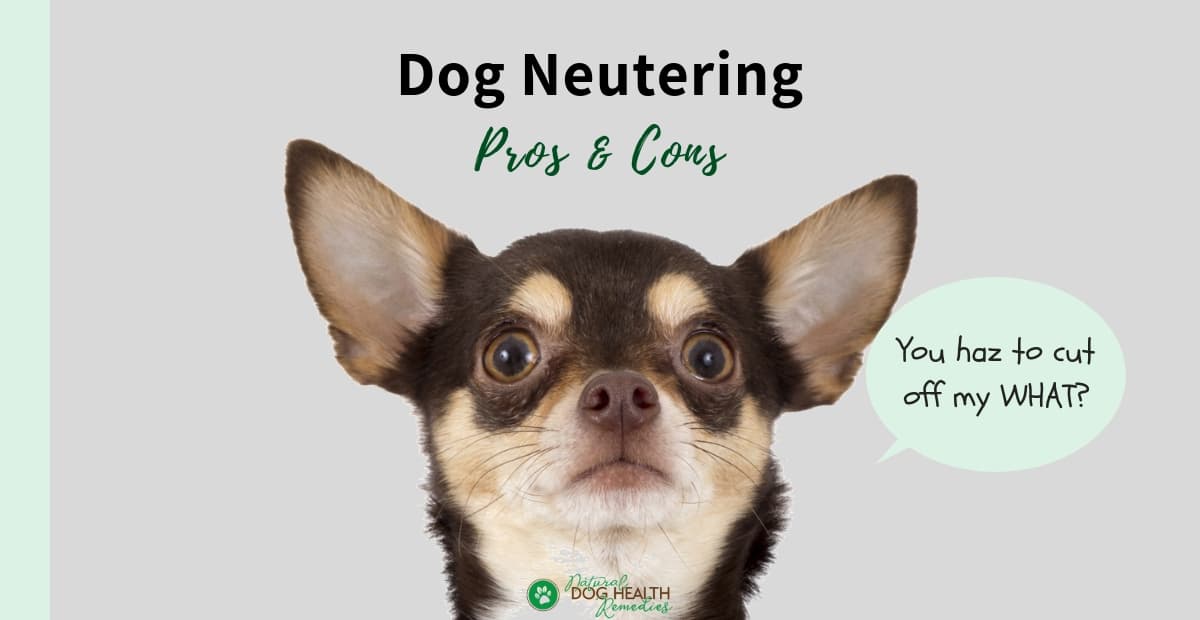 Dog neutering is the surgical removal of reproductive organs in dogs to render them sterile ("Neuter" is not gender specific).

If you are considering adopting a puppy, or if you have an intact dog and are wondering if you should have your dog neutered, read on ...

This page looks at the following issues related to neutering:

Dog Neutering - What are the Options?

For male dogs, there are two options.

One is castration - removal of the testicles.

There is also a relatively new non-surgical male dog neutering procedure called "zeutering". It doesn't involve removing the testicles. Instead, the procedure uses an injectable drug called Zeuterin&reg. It works by causing permanent and irreversible tissue damage to the testicles, making the dog incapable of producing any new sperms.

A spayed dog will stop producing sex hormones (progesterone and estrogen) and thus does not go into heat. Spaying is the most common option for neutering female dogs.

There are two other options for neutering females although these two options are far less commonly done by vets.

One option is hysterectomy (removing the uterus only). The other option is tubal ligation (cutting and tying off the oviducts). These two options do not stop the female dog from producing sex hormones. Therefore, the female will still go into heat twice a year and mate, but will not get pregnant.

Pros and Cons of Neutering a Dog

Like anything else, there are both pros and cons when it comes to neutering your dog.

If there is no "birth control" among dogs and other domesticated pets, there will be too many unwanted, homeless dogs and other pets, putting a lot of burden on animal shelters and resulting in the euthanasia of unwanted pets.

It is estimated that in the USA alone, 5 to 12 million unwanted animals are euthanized every year in animal shelters.

Perhaps one big benefit of neutering a male dog is it stops him from roaming the streets to get to a female dog in heat. A dog roaming around can get into accidents easily. As well, a neutered dog is less likely to mark territory, mount or hump other dogs (or the fire hydrant!)

Some health problems are often seen in the reproductive systems of intact, nonbreeding dogs. Dog neutering, therefore, can prevent some such health problems in our dogs.

For example, neutering can prevent certain prostate problems from arising when the dog gets older, such as prostate enlargement (but neutering CANNOT prevent prostate cancer in dogs - see Cons below).

Certain types of hernias, testicle and anus tumors can also be prevented by neutering.

(However, early neutering and spaying can increase the risks of developing other forms of cancer and some other health problems later on in the dog's life. See below.)

As well, in intact dogs, when the hormonal drives cannot be satisfied, they may become aggressive, or may experience mental stress, which in turn can cause health problems in the long run.

Although very rare, the dog may experience complications during surgery or recovery. For example, some dogs may react badly to anesthesia, or the wound may not heal properly resulting in infections.

Try to find out if your dog's breed has inherited cancer risks and, if so, for which type of cancer (e.g. Rottweilers are 4 times more likely to develop bone cancer if neutered before one year of age.) This can help you make more informed decisions as to whether you should neuter your dog.

Early neutering can also increase the risks of developing certain health issues, such as:

Early age spaying/neutering is associated with an increased incidence of noise phobias and undesirable behaviors, such as mounting.

Some dog parents are also concerned about the costs involved. However, if that is your concern, try contacting your local humane society. They may be able to recommend some city-run low-cost clinics that routinely perform dog neuter operations.


Neutering can Cause Obesity

There is no evidence that neutering causes obesity. Many dogs (including mine!) remain slim after the operation. Dog obesity is caused by over-eating and a lack of exercise.

Neutering can Cause Personality Change in Dogs

Some people believe that neutering can cause a personality change in a dog - he may not be as friendly and playful as before. This is another myth which has no scientific basis.

A dog's personality is shaped by genetics and to some extent the environment in which he grows up and the training he receives. If anything, a neutered male dog, without the surging homones during his "teenage" years, usually becomes less aggressive and more relaxed and therefore makes a much better pet.

What's the Best Age to Neuter a Dog? 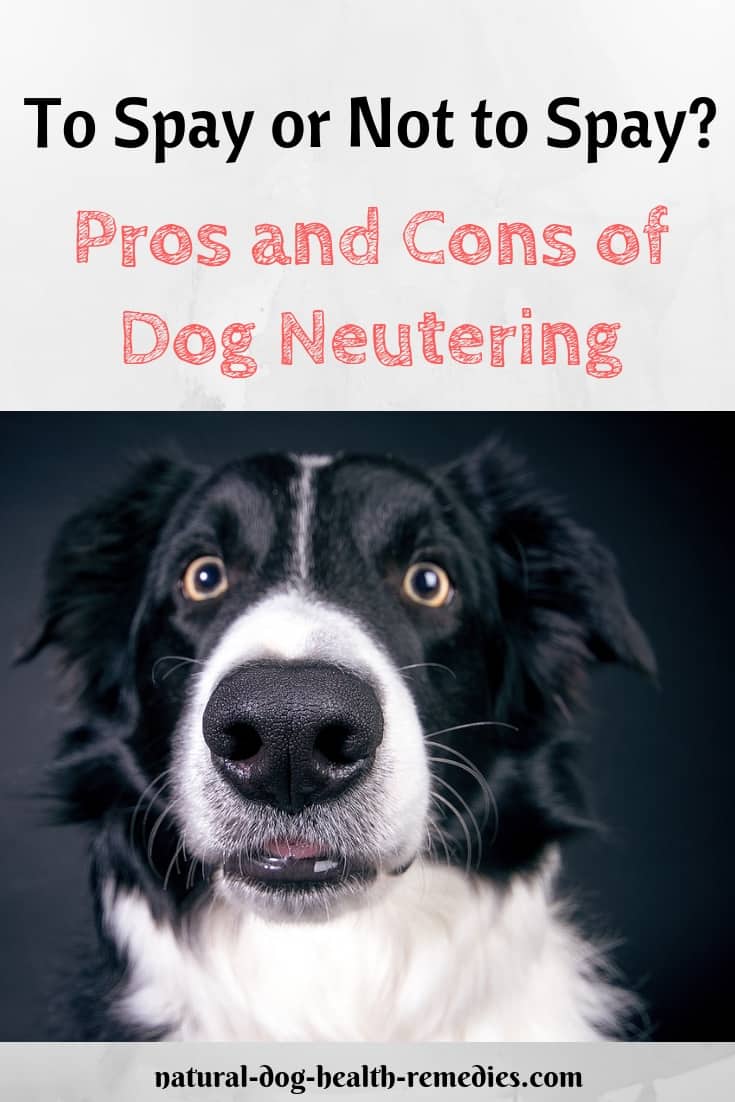 Most veterinarians suggest neutering a dog before their first heat. This means about six months for females and eight months for males.

Recently, some dogs are being neutered at an early age (six to eight weeks) - especially those dogs at animal shelters. However, the operation can easily cause the puppies to become quite ill because the stress is simply too great on the dogs, so neutering at such an early age is not advisable.

Additionally, as mentioned above, since early neutering/spaying (before one year of age) increases the risks of the development of certain cancers and health problems, some veterinarians even advise neutering a dog after puberty.

As you can see, deciding when to neuter a dog is not simple and straightforward. It depends on such factors as the breed and the health of the dog.

In view of the potential health risks associated with early neutering, however, perhaps it is better to neuter a dog after puberty IF the dog parent can be absolutely certain that the dog will not have the opportunity to mate.

Is the Neuter Operation Risky?

Some dog parents are reluctant to put their dogs through the neuter operation because they think that it is painful and risky.

In fact, neutering is done under general anesthesia and so the dog does not feel any pain. Painkillers are also prescribed to manage pain post-surgery.

Of course, all medical procedures can pose a certain degree of risk to the patients, but as mentioned above, apart from some rare cases, neutering is generally a simple, low-risk procedure, especially when done on young dogs.

One thing that you may want to ask your vet to do is to have a blood test done on your dog before the operation to make sure that the dog's liver is functioning normally.

As you know, the liver is the organ that processes wastes and toxins. If your dog has a weak liver or some form of liver problem, his liver may not be able to process the chemicals in the anesthetic, which may lead to complications.

Natural Remedies for Neutering After Care

There are quite a few homeopathic remedies and natural supplements that can be used to help relieve surgery-related stress and post-surgical pain.

These vitamins are antioxidants and help detoxify anesthetics and drugs.

On the day of the surgery, give your dog Bach Flower Essences Rescue Remedy and the homeopathic remedy Arnica 30C.

These two remedies can be combined in a small dropper bottle.

Put 5 drops of Rescue Remedy and a few pellets of Arnica into the bottle. Fill the bottle with water and give several drops of the mixture to the dog by mouth before the surgery. This will calm the dog and relieve his stress.

Give another few drops immediately after the surgery if possible, and every hour or two thereafter for the first day.

Continue for several days, gradually lengthening the interval between doses. This will greatly help with pain and surgical stress.

There are other homeopathic remedies for post-surgery support.

If your dog is slow to wake up from anesthesia, or if he has post-surgical bleeding, use Phosphorus.

If the surgical wound shows any red irritation, or there is a discharge of fluid or pus around the wound, use Apis mellifica.

Calendula gel can be used topically to ease incision pain and to speed healing.