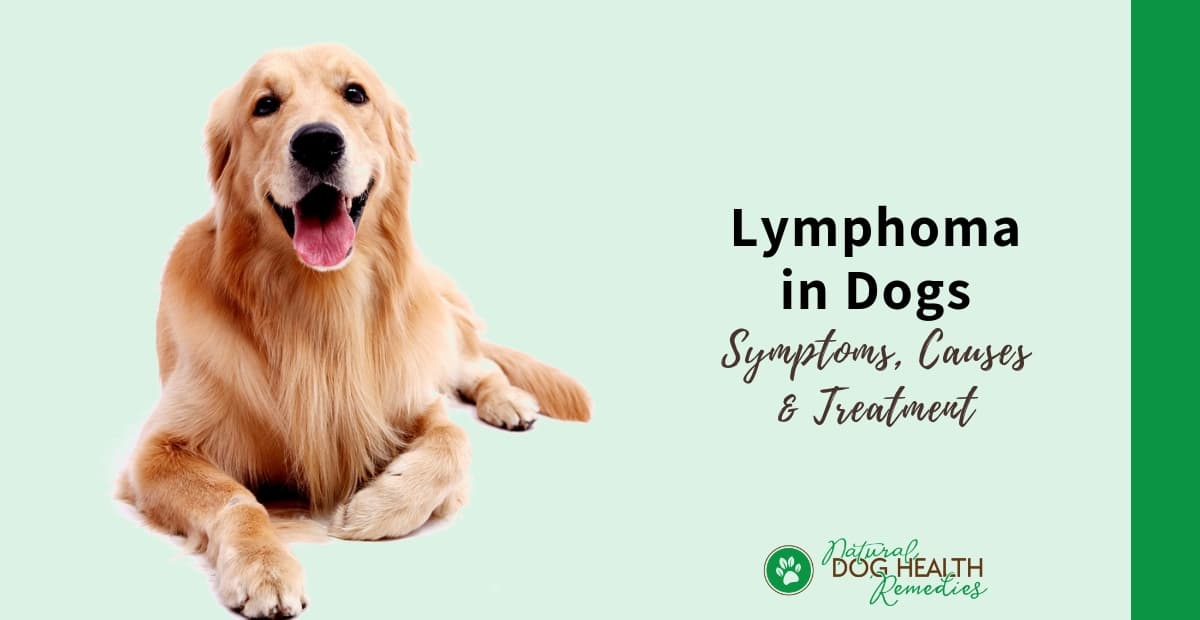 Lymphoma (or lymphosarcoma) is a malignant cancer of the lymphocytes. Lymphocytes are cells in the lumphatic system which are responsible for mounting an immune response.

Lymphoma is rather common in dogs, making up about 7 to 25 percent of all canine cancers. It occurs more commonly among middle-aged to older dogs (between 5-9 years of age).

It typically occurs in the lymph nodes, although it can occur in other parts of the body as well.

About eighty percent of all cases of lymphoma in dogs is the multicentric form, in which different parts of the body are attacked by cancer cells that use the lymphatic system to spread.

As you can imagine, because the lymphatic system has "tubes" connecting the whole body, lymphoma cancer cells can spread easily because they are highly mobile.

Symptoms of Lymphoma in Dogs

Lymphoma can occur in:

Lymphoma can also occur in other less common sites in dogs, such as the bone marrow, the nervous system, nasal cavity, or kidneys.

Clinical signs depend on the location of the tumor(s), and the extent to which the cancer has developed.

The enlarged lymph nodes can be felt, as mentioned above, most commonly under the jaws. However, lymph nodes in other parts of the body (around the area of the shoulder, the back of the leg, behind the knee joint, and in the groin area) can also be swollen.

The swollen lymp nodes are firm and are freely moveable beneath the skin. The dog usually does not feel sick, and doesn't feel any pain.

For lymphoma that occurs in the stomach or intestines, the dog patient may show signs that are typical of gastrointestinal problems, such as:

Lymphoma that occurs in the skin can present itself in several different ways, including single or multiple lumps in the skin, or mouth. These lesions can be red, itchy, and ulcerated. 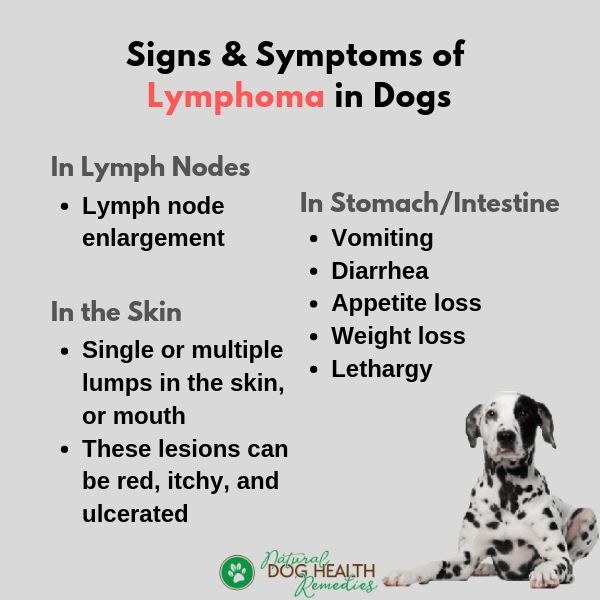 Causes and Risk Factors of Lymphoma in Dogs

The exact cause is unknown, although there seems to be increased risk in dogs who have been exposed to the herbicide 2,4-D. Other possible causes include exposure to strong magnetic fields, or genetic predisposition.

Also, researchers from UCLA's Johsson Comprehensive Cancer Center found that certain types of "bad" gut bacteria could contribute to lymphoma in people. It's possible that over-proliferation of bad bacteria in a dog's gut could cause lymphoma in dogs down the road as well.

In addition, age seems to be a risk factor for canine lymphoma. Lymphoma occurs more commonly among middle-aged to older dogs. In fact, most affected dogs are between 5-9 years of age.

Breed-wise, the following breeds of dogs tend to have a higher risk of developing lymphoma:

Diagnosis and Treatment of Lymphoma in Dogs

Depending on the location of the tumor, canine lymphoma is diagnosed using a combination of tests, such as blood tests, fine needle aspirates of the tumor, biopsies, x-rays and ultrasound.

Since lymphoma in dogs is considered a systemic or whole body disease and may strike in any location, surgery is ineffective and impractical.

The treatment of choice is chemotherapy which usually consists of a combination of oral and injectable drugs given on a weekly basis.

An example of a chemotherapy protocol is the COP Protocol (using a combination of cyclophosphamide, vincristine, and prednisone).

Is Lymphoma in Dogs Curable?

Unfortunately, lymphoma in dogs is not curable, chemotherapy can only put the dog in remission (i.e. the dog is temporarily free of all cancer symptoms.) 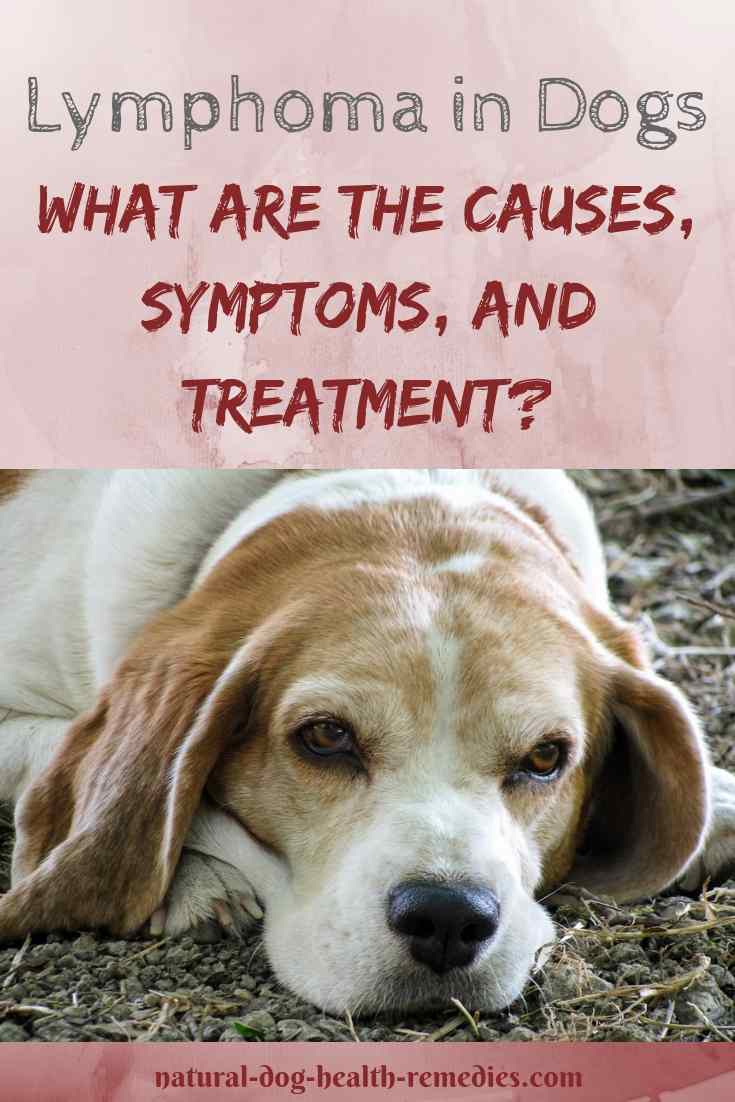 While undergoing chemotherapy, regular blood tests should be carried out to monitor for decreased white blood cell counts (drug-induced myelosuppression).

For the same reason as surgery, radiation is not commonly recommended for lymphoma in dogs. However, relatively novel approaches have recently been adopted to treat canine lymphoma.

For example, the dog patient may receive half-body irradiation - each half body is treated 4 weeks apart. Also, radiation to a single lymph node or all nodes may be given to dog patients that are drug-resistant.

When a dog treated with chemotherapy comes out of remission, further chemotherapy (rescue protocol) can be given which may induce second or even third remissions.

However, understand that cancer cells that have survived prior chemotherapy treatments are stronger and more resistant to being eradicated. So, stronger and stronger medications have to be used.

Dog parents, at that stage, have to make a decision as to whether it is in their dogs' best interest to have more rounds of treatment or whether euthanasia is a better option.

What is the Life Expectancy in Dogs with Lymphoma?

Lymphoma can be aggressive and can rapidly ruin the health of the internal organs.

Without treatment, the life expectancy is less than eight weeks.

With chemotherapy, as mentioned above, over 75% of dogs with lymphoma can achieve a complete remission of 12 to 14 months.

Of course, in cases where the dog patients do not respond well to the chemotherapy drugs, the life expectancy will be shorter.


Complementary treatment options such as herbs and supplements can be incorporated into the treatment protocols for better outcome. Talk to a holistic vet about this and, in the meantime, visit our pages on Herbs for Canine Cancer and Dog Cancer Diet for more information.