Preventing and Treating Heartworms in Dogs 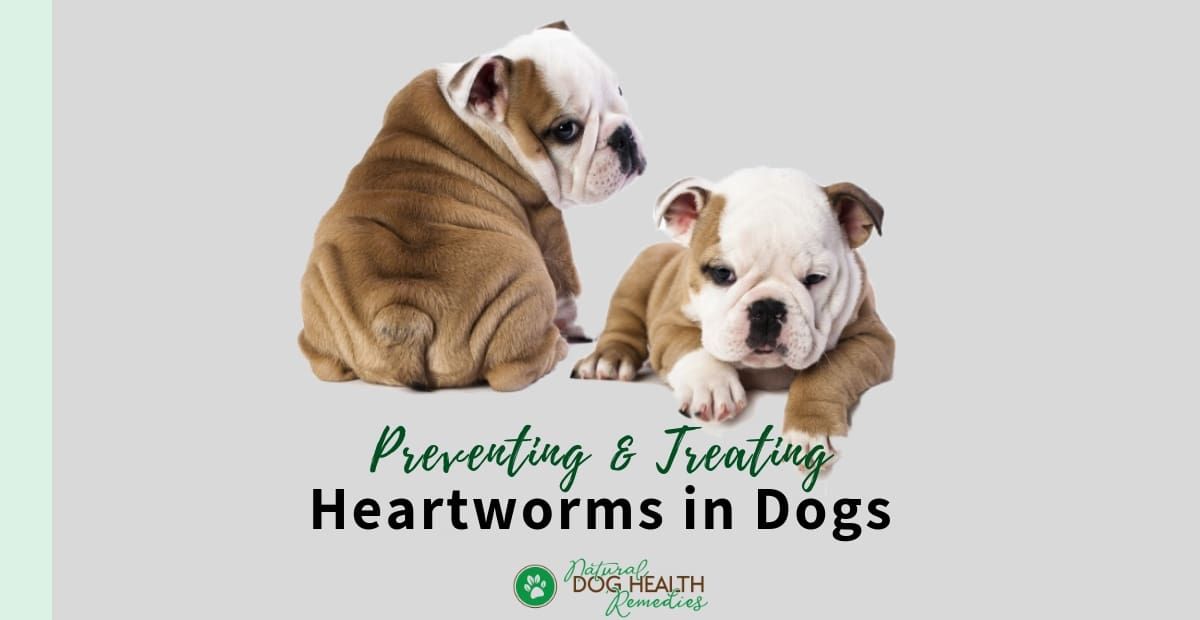 If you live in a place where mosquitoes are aplenty, you need to take measures to prevent heartworm disease in your dog.

This page takes an indepth look at heartworm in dogs, and includes the following topics:

The heartworm (Dirofilaria immitis) is a parasite that lives in the heart of a dog. Dogs are the natural hosts of heartworms although in rare cases cats and ferrets can be infected as well.

Heartworms are about the size of thin spaghetti and can grow as long as 11 inches. Adult heartworms produce young ones called microfilariae which circulate through the dog's bloodstream in greatest numbers in hot weather when mosquitoes are abundant.

When a mosquito bites an infected dog, the microfilariae are sucked up by the mosquito where they develop through several stages if the conditions are right.

Specifically, the outside temperatures must be above 57°F (13.9°C), day and night, for a minimum of 8 days. The warmer the temperature, the faster the larvae will mature and be able to infect other dogs.

If the temperature drops below 57°F, the larvae stop developing until the weather warms up to 57°F or above. Larvae reach their infective stage in 8 to 30 days.

When a dog is bitten by a mosquito with mirofilariae, the larvae are deposited on the skin, where they progress through two more developmental stages under the skin. After that, they enter the bloodstream via nearby veins.

Once inside the body, they migrate to other body tissues and eventually to the heart. They usually occupy the right heart chamber, i.e. the side of the heart that pumps blood to the lungs. They also like to hang out in the pulmonary arteries (arteries of the lung).

Once settled into their new "home", they mature further into adult worms.

The adult worms then reproduce and the microfilariae in the dog's blood will be passed on to the next mosquito that bites the dog.

The whole life cycle takes about 6 to 7 months after the original mosquito bite.

Adult heartworms can live up to 7 years in a dog.

What are the Symptoms of Heartworms in Dogs?

Heartworm disease is classified into four stages. The higher the stage, the more serious the infection and of course the symptoms. 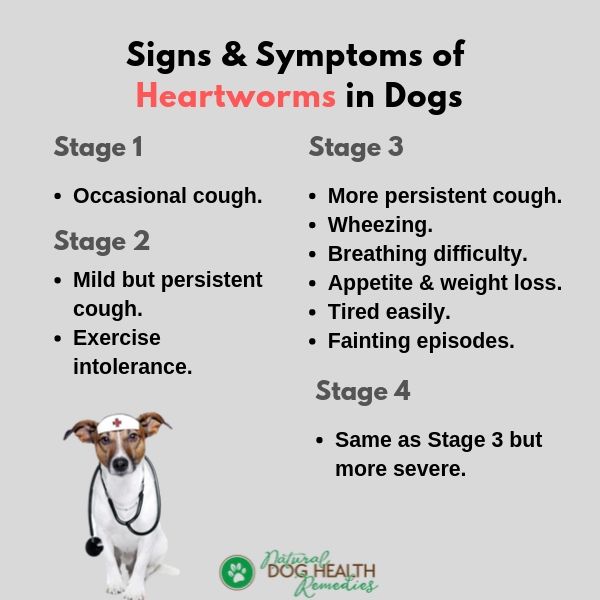 Heartworms can be diagnosed by means of a simple blood test when a veterinarian finds microfilariae in the blood.

As mentioned above, an infected dog may not show any symptoms of illness at its early stage or if the infestation is light. Usually a dog has to be infested with a considerable number of worms before showing symptoms.

If you live in a high-risk areas, it is extremely important to have regular blood tests to make sure that your dog is not infected.

Treating heartworm infestations is very involved and almost always requires hospitalization. The treatment can be very dangerous as well because some of the drugs used (e.g. Immiticide) are arsenic-based and are understandably very toxic.

Treating heart worms involves the injection of the heartworm drugs into an infected dog to kill the adult worms.

However, unlike intestinal worms which can then be eliminated through the digestive system, the dead heart worms have nowhere to go. They die in the heart chamber and the pulmonary arteries and then start to decompose over about 30 days.

During the 30 days after the injection, the dog patient has to be kept very quiet to decrease the chances of these tiny pieces of dead worms from going into the deeper arteries of the lungs causing obstruction of the blood vessels, which can sometimes cause immediate death to the dog.

Also, the massive die-off of the worms can cause severe inflammation and even respiratory failure. Sadly, not all dogs survive the treatment.

If your dog unfortunately requires heartworm treatment, use herbs such as Milk Thistle to minimize toxicity from the medications.

For dogs with Stage 4 infestation, the majority of worms have to be removed surgically. After that, heartworm meds will be given to kill off the rest of the worms that may still remain in the dog's body.

Side Effects of Heartworm Treatment

As mentioned above, the heartworm treatment medicine (Immitcide) is toxic and can cause undesirable side effects. For example:

Since treating heart worms in dogs is extremely risky and hard on the dog, the preferred route is taking preventive measures.

Compared to other medications, these drugs are generally safe and effective as the dose needed to prevent heartworm infection and disease is very tiny, approximately 1/30 of that necessary to treat other parasitic diseases.

However, the drugs could cause side effects in some dogs.

For example, although quite rare, ivermectin may cause such side effects as depression, balance problems, and blindness.

Certain breeds (collies and related hearding breeds such as Old English Sheepdogs and Australian Shepherds) are more sensitive to the neurological effects of the drug. Therefore, ivermectin should be avoided in these breeds.

For collies and breeds that cannot tolerate ivermectin, milbemycin is usually used. However, this drug can also cause side effects, such as depression, lethargy, vomiting, appetite loss, diarrhea, convulsions, weakness and excessive drooling.

In addition to oral drugs, there is also an injectable drug called ProHeart® 6 that can be used to prevention heartworm infections in dogs. Be sure to check this page to see if this drug is suitable for your dog.

Before starting a dog on any heartworm preventive medicine, be sure to take the dog to a vet and get a blood test to see if the dog is already infected with heart worms.

And since there are already microfilariae circulating in the dog's blood, if a heartworm preventive is given to the dog, the preventive may cause the microfilariae to suddenly die. This could actually be dangerous to the dog as the sudden mass death of microfilariae could trigger a shock-like reaction in the dog. Sometimes the dog may die as a result.

Any Natural Remedies For Preventing or Treating Heartworm? 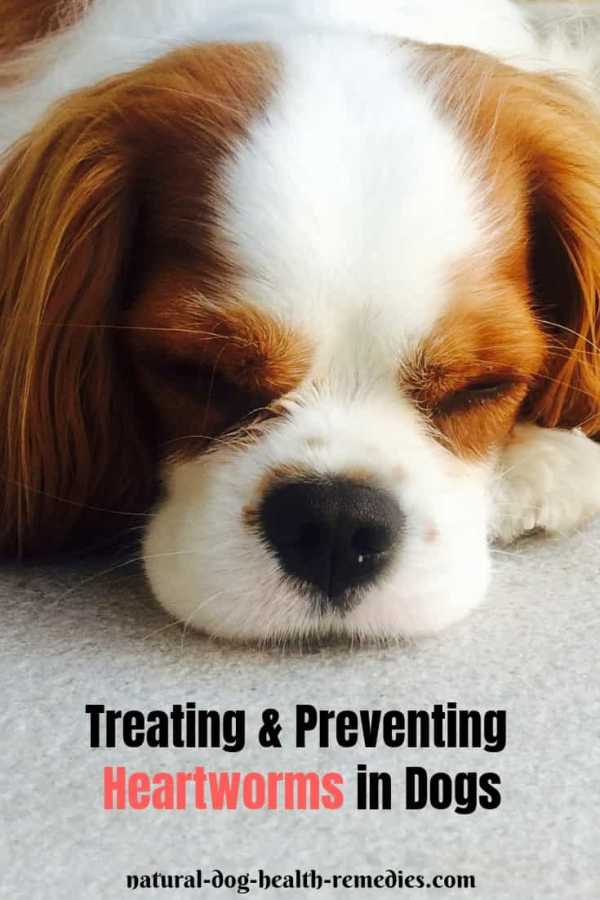 Some dog parents are reluctant to give conventional heartworm preventive drugs to their dogs in view of the potential side effects that may be caused. Many wonder if there are alternatives such as herbal or homeopathic remedies that can prevent heartworm infection in dogs.

There are a few herbal and herbal-homeopathic combo remedies that claim to be able to prevent heartworm in dogs. However, they all contain the herb wormwood which, although a classic dewormer, is too strong and can be toxic if used for long periods. (Wormwood should not be used at all in dogs with liver disease.)

Black walnut hull is another herb that is used in some herbal formulae for heartworms. However, this herb should also be used with care because of the potentially irritating tannine constituents it contains which can cause vomiting, diarrhea and gastritis in dogs.

In addition, it is not really clear if black walnut hull is effective in preventing or treating heartworm in dogs.

Some veterinarians, including Dr. Pitcairn, have been experimenting with a homeopathic preventive "nosode" made from microfilaria-infected blood. It is still in its clinical study stage, but the results are encouraging. In the future, this may eventually be the alternative to drug use.

At this moment, however, treating heartworm using remedies alone (without conventional drugs) has not been proven entirely successful.

It seems that for now, if you live in an area where mosquitoes are plentiful, the best way is to use conventional heartworm preventive drugs to protect your dog from getting infected.

In addition, you may want to: