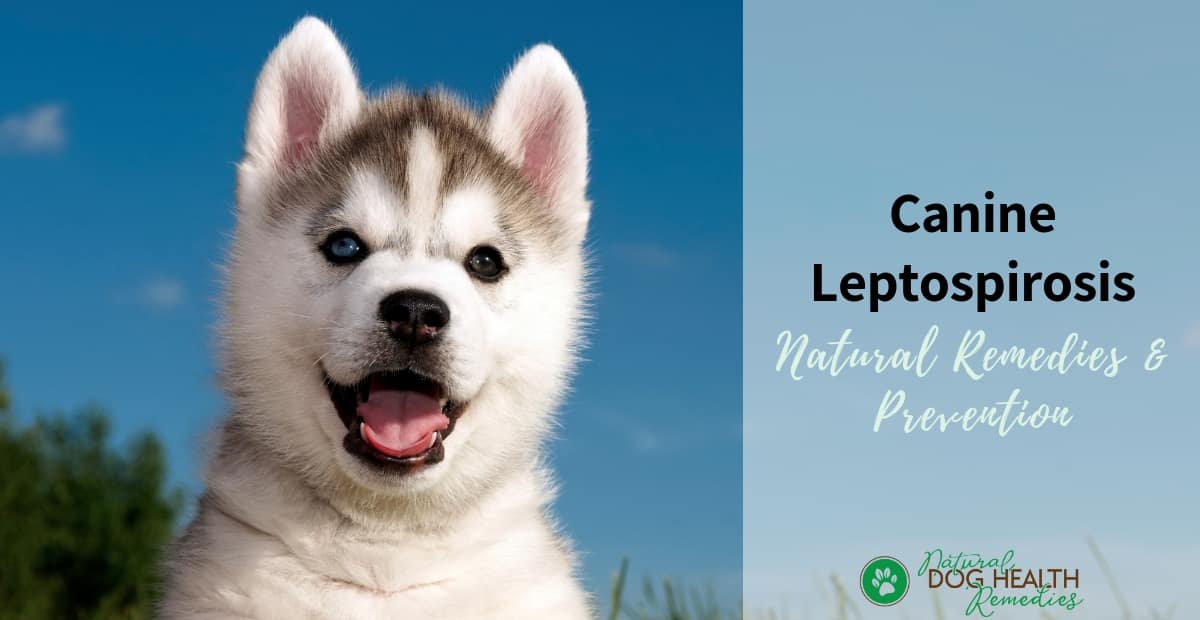 marvistavet.com Leptospirosis is a bacterial infection in dogs caused by a family of organisms known as Leptospira interrogans.

There are over 20 different strains (serovars) of this organism. Among these strains, eight of them are of particular significance to dogs, people, and some other animals, such as livestock. These strains produce different types and seriousness of disease depending on the animals they infect.

When examined under a microscope, the bacteria look like a bunch of question marks. If the bacteria enter the bloodstream of a dog, the dog will become infected and develop canine leptospirosis.

How is Leptospirosis Transmitted?

Leptospirosis is transmitted primarily through the urine of an infected animal.

It can also be transmitted to dogs when they consume contaminated water or food. Sharing bedding with an infected dog is another way to get the disease.

If there is a cut, bite wounds, or other open wounds on the dog, the bacteria can also be picked up through such wounds. As you can imagine, dogs living in a kennel have a higher risk of being infected.

Compared to people, dogs are at higher risk of being infected with leptospirosis because by nature dogs like sniffing - especially the urine spots left by other dogs!

Outbreaks of this disease are most prevalent during rainy seasons and flooding when there are plenty of water puddles, because the bacteria thrive in stagnant or slow moving water such as puddles. The lepto strains can remain infective for up to 6 months in the soil.

Leptospirosis is a disease of tropical and temperate climates, because the organism does not survive well in freezing weather.

A dog is infected when the bacteria enters his bloodstream through mucous membranes or broken skin. Upon entering the body, the bacteria multiply rapidly, and spread to other areas.

Primary areas that are most commonly affected include the liver and the kidneys, although other areas (e.g. the spleen, nervous system, eyes, and genital tract) can also be affected.

Signs of the disease generally appear within one to two weeks after contact with the infected urine, although sometimes symptoms can begin as soon as two days after exposure.

Early signs of infection include:

In extremely acute cases, the dog may suddenly go into shock and die before developing any further symptoms that usually involve the kidneys and the liver.

In subacute cases, an infected dog may show these signs:

In addition, depending on the organ being affected, some dogs may drink more and have more urine output while others may have a decreasing output of urine. A dog whose liver is affected may develop jaundice.

After 2-3 weeks, dogs whose kidney or liver are affected may either start to show improvement in organ function, or they may develop chronic kidney failure.

Most cases of leptospirosis in dogs are subacute or chronic although rarely some dogs do develop acute cases of the disease.

Diagnosis of leptospirosis is through a blood test.

Conventional treatment for leptospirosis in dogs depends on how seriously ill the dog is.

Dogs seriously ill with lepto have to be hospitalized and treatment includes the use of antibiotics such as penicillin and tetracycline to treat the bacterial infection. Other treatment such as fluid replacement, therapies to deal with any liver or kidney involvement may also be necessary.

If a dog is not as seriously sick, she can be treated at home. However, extreme care has to be taken to prevent the spreading of the disease.

Since leptospirosis can infect people as well, be sure to disinfect your home and places where your dog has urinated, and wear protective gloves when cleaning up after your dog.

After Care for Dogs with Leptospirosis

While natural remedies such as herbs cannot cure leptospirosis in dogs, these home remedies can be effectively used as aftercare treatment.

In cases where a dog's liver has been involved, herbs beneficial to the liver such as milk thistle, turmeric, yarrow, licorice, and dandelion can be used. Please visit this page for more information.

If a dog's kidneys have been affected by canine leptospirosis, diuretic herbs such as dandelion, alfalfa, and nettle are beneficial. Please visit our page on Remedies for Kidney Failure for more information.

How to Prevent Leptospirosis in Dogs

The best way to prevent your dog from getting leptospirosis is to keep him away from places where there is a high risk for your dog to be infected, such as questionable water sources, or animals that may have been infected.

Another way to prevent leptospiroris in dogs is vaccination.

Although vaccines are available for leptospirosis in dogs, until the beginning of the year 2000, the vaccines were effective only against two serovars (canicola and icterhaemorrhagiae). As a result, these two serovars have been decreasing in total number of infections.

Recently, vaccines for two additional types (grippotyphosa and pomona) have been developed.

The problem is, adverse reactions to leptospiral vaccine (e.g. soreness and swelling of the injection site, temporary loss of appetite loss, etc.) are rather common in dogs. Some dogs may even develop serious adverse reactions, such as hives, difficulty breathing, facial swelling, etc.

Leptospiral vaccines may only protect dogs for about 6-8 months, so dogs who live in high risk areas have to be vaccinated two times a year.

Because of the potential reaction to the vaccination, dog parents should consult with their veterinarians to determine whether the risk of contracting leptospirosis outweighs the risk of vaccine reactions.

Usually, veterinarians do not suggest vaccinating dogs in areas where the disease is not prevalent.

If you live in a high risk area but do not want your dog to be vaccinated, consult with a holistic vet for the possibility of using a homeopathic nosode instead.

A nosode can be considered as an "oral vaccine". It can "immunize" the body against a specific disease and is prepared from the actual organism which is associated with the disease in question, but is treated and diluted many times.