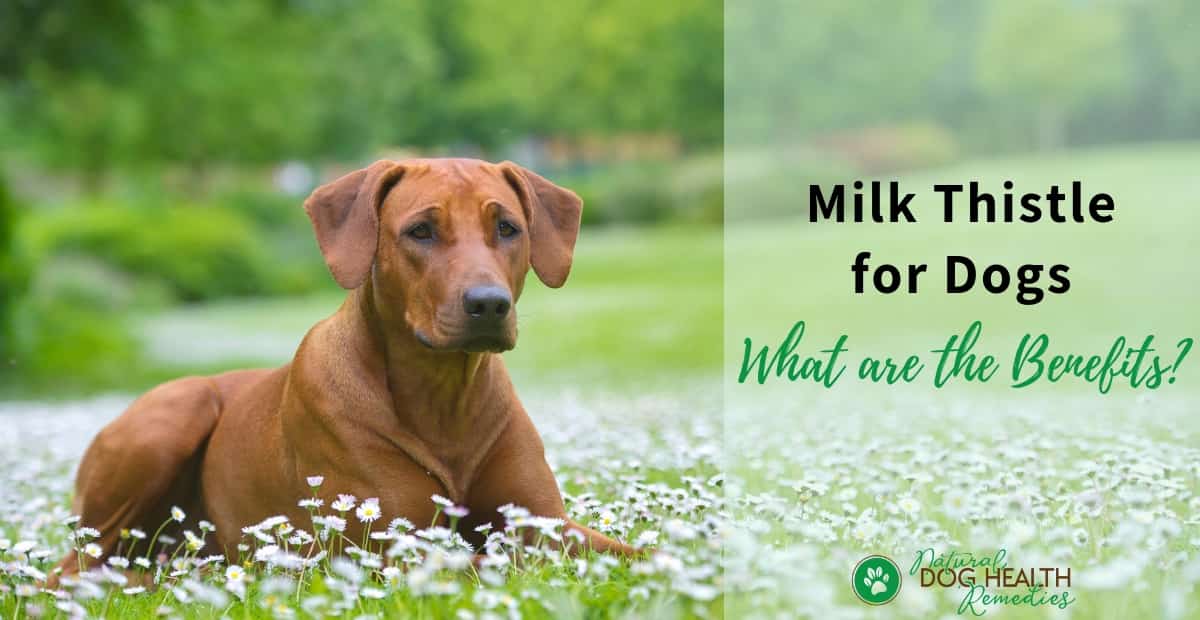 Milk thistle has long been hailed as a "liver herb", well known for its liver enhancing and protective functions for both humans and pets.

Holistic veterinarians, as well as an increasing number of conventional vets, now routinely use milk thistle to treat diseases related to the liver, as well as for liver detoxification in dogs.

Since liver problems are common among dogs, especially older dogs, it makes sense to learn more about this herb, doesn't it?

This page looks at the following:

The herb milk thistle contains a flavonoid compound called "Silymarin", which itself is a combination of several other active compounds, such as Silybin A and Silybin B.

Extensive studies around the world have found that silymarin is safe and effective in treating a variety of liver diseases and other conditions, from kidney disease to mushroom or lead poisoning.

It works by displacing toxins trying to bind to the liver and by causing the liver to regenerate more quickly.

In addition, silymarin can work as an antioxidant for the liver - it scavenges free radicals and stabilizes liver cell membranes. It also stimulates the production of new liver cells.

The silymarin compound (particularly silybin) in milk thistle has numerous functions and are beneficial to dogs with various health issues:

Silymarin and other related compounds support and protect the liver.

Specifically, they make the liver cells stronger against harmful toxins and stimulate new cell reproduction. So you can see that milk thistle is a great and very effective herb in treating dogs with liver problems and related diseases, such as:

(One liver disease that milk thistle is not effective in treating is advanced liver cirrhosis.)

Dogs with Cushing's disease has high levels of cortisol circulating in the blood. This puts a lot of stress on the liver as it has to work real hard to process the excessive amount of cortisol.

In fact, dogs with Cushing's disease usually have elevated liver enzymes (ALT and ALP). And if they are not treated in a timely fashion, very often they will develop liver disease down the road.

To help support the liver, dogs suffering from Cushing's can benefit greatly if supplemented with milk thistle.

May Help Dogs with IBD

Glutathione is a protein stored primarily in the liver. It is a major detoxifier and antioxidant in the body. As such, it is essential for maintaining a healthy immune system.

Unfortunately, glutathione levels can be negatively impacted by factors such as stress, some medications, and environmental toxins and chemicals. Glutathione levels also naturally drop with age, and depletion of this protein may speed up the aging process!

Milk thistle has been known to stimulate the uptake of glutathione from liver cells and can also prevent depletion of this protein. In fact, it has been found that milk thistle could increase glutathione levels in the liver by up to 35%!

Because of the powerful antioxidant properties of the silymarin compounds, milk thistle is an ideal herb for liver detoxification.

Who needs detoxification? You may ask.

Well, all dogs do. And in particular: 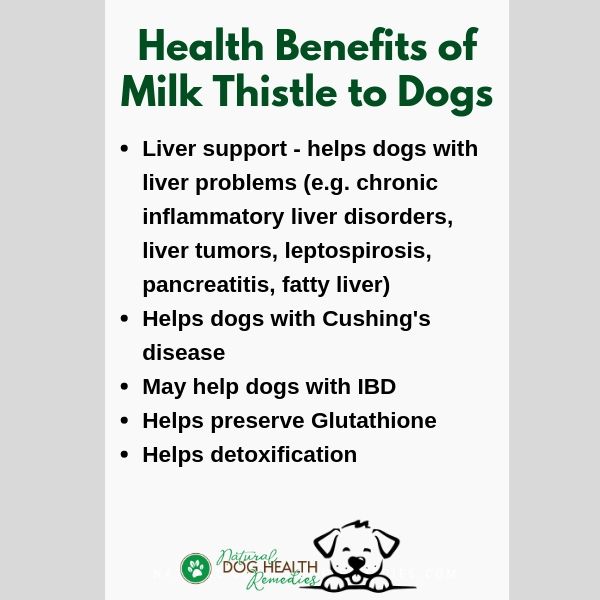 Is Milk Thistle Safe for Dogs? 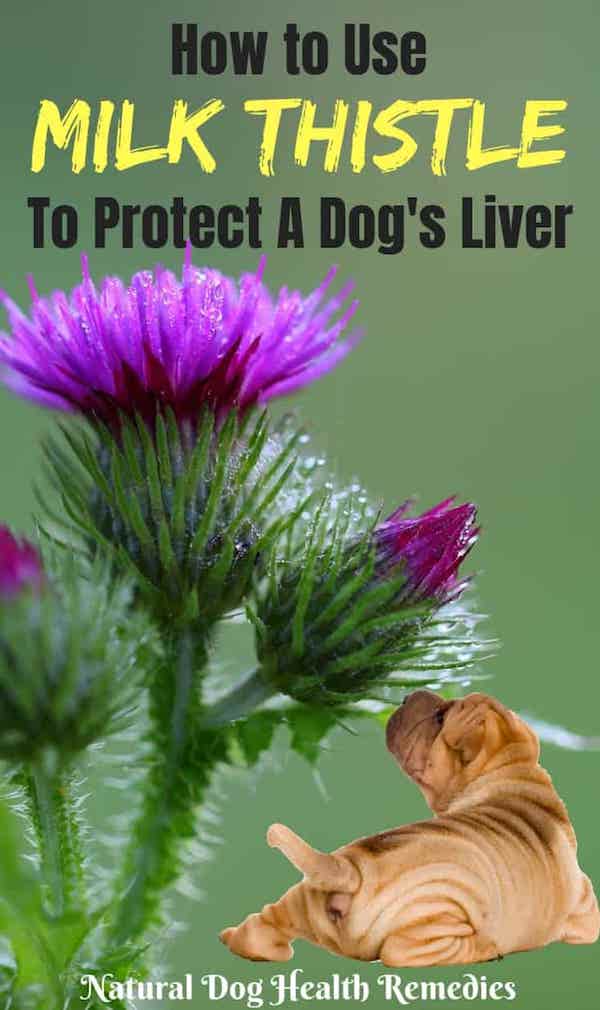 Milk thistle is generally safe, although taking too much of the herb at a time can sometimes cause an upset stomach, gas, or mild diarrhea.

It is recommended that the herb be given to dogs on an empty stomach.

Note, however, despite the fact that milk thistle is hailed as "the" herb for the liver, it should NOT be given to healthy dogs as a daily supplement. Some studies show that long-term use of very high dosages of milk thistle will eventually suppress liver function.

So remember, milk thistle should be used only as a medicinal herb for detoxification as needed, and for the treatment of liver disorders and other health problems as mentioned above.

According to holistic Dr. Doug Knueven (drdougknueven.com), because milk thistle interacts with the liver's detoxification system, it should not be used with:

Additionally, silymarin is not recommended for use in pregnant women. It is probably a good idea NOT to use milk thistle in pregnant dogs until more information has become available.

So how much milk thistle should I give my dog? You may ask.

The standard dosage of milk thistle extract is based on a silymarin content of around 80 percent. Most supplements of milk thistle contain about 100 to 200 mg of the herb.

As mentioned above, milk thistle is generally safe on dogs. For dogs with advanced liver disease, a dosage as high as 200 mg per 10 pounds of body weight is possible.

For other liver problems or health conditions, 75 to 100 mg per 10 pounds of body weight per day is sufficient to see results. If milk thistle causes upset stomach, gas, or mild diarrhea in your dogs, simply reduce the dosage.

Remember glutathione, the "great liver detoxifier" that I mentioned above? SAM-e is essential for the production of this substance. So supplementing SAM-e with milk thistle can better facilitate liver support and liver detoxification.

A Great Natural Product of Milk Thistle for Pets

This milk thistle herbal tincture is glycerine-based (not alcohol based) so it is safe and easy to administer to dogs. Many dogs with liver problems have had excellent results after using this natural product.

The supplement reportedly causes little or no side effects. And looking at the reviews on Amazon.com, many dog owners have seen quite good results in their dogs after giving them Denamarin.

However, some holistic vets and herbalists quite rightly point out that an herb works because of the synergy of many compounds within the herb. Sometimes, extracting just one or two active ingredients from a plant just doesn't do the job.

In an article, Dr. Doug Knueven commented, "I have had cases of liver disease in dogs that did not improve after months on Denamarin but did improve when switched to milk thistle. The active ingredient in an herb is the herb."

For me, I would choose to give my dog the herb milk thistle (and SAM-e) over a synthetic pill like Denamarin, but that's just me.

The bottom line? Discuss with your vet and get his/her opinion. If you want convenience, maybe ask your vet about Denamarin and determine if it is effective for your dog.