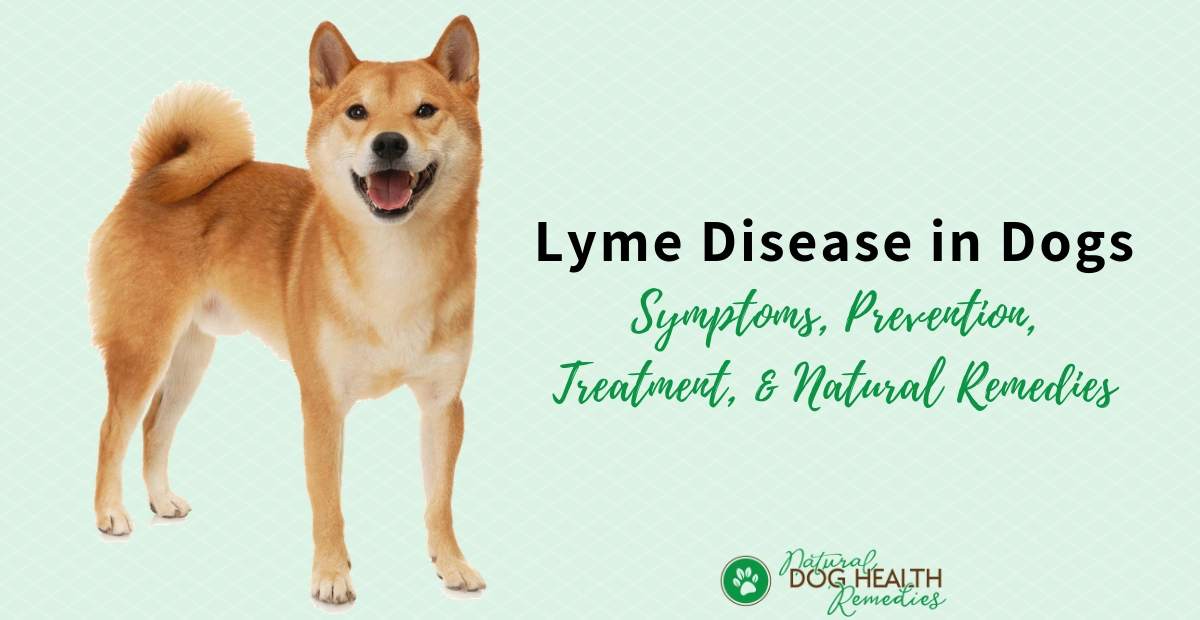 A dog acquires the spirochetes if bitten by an infected tick.

As we all know, Lyme disease affects not only dogs but also people. The disease cannot be transmitted from dogs to people, but if an infected tick becomes detached from your dog and finds you, the tick could possibly bite and infect you.

As Lyme disease poses threats to both dogs and humans, we should be vigilant especially during the summer months.

This article looks at the following topics:

Lyme disease is a regional disease, and is most prevalent in New England and the Middle Atlantic states. However, with climate change and warmer weather seen in many areas, the disease is slowly spreading. (Check this map to see if your region is tick-endemic.)

How is Lyme Disease Transmitted in Dogs?

As mentioned above, a dog could get infected with Lyme disease if bitten by an infected ticks. Although Lyme disease is most prevalent during the summer months from May through August (or April to October if you live in a hotter country) when ticks are most active, note that ticks can be active any time the temperature is over 32°F (0°C).

It is commonly believed that ticks have to be attached to a host (dog) for about 24 to 48 hours before the transmission of spirochetes can occur. However, in a study, it was found that transmission could occur quicker depending on various factors (such as the Borrelia species). The study also mentioned that the risk of Lyme disease increases with longer tick attachment time.

It means that during peak tick season or if you live in a tick-endemic area, it is important to have routine "tick checks" on your dog (twice daily), and if ticks are found that they be removed right away. (Not sure exactly how to remove a tick from a dog? Read this article to find out.)

The good news is that, just because you've found a tick on your dog doesn't mean that the dog will develop Lyme disease. It has been found that only about 10% of dogs who are exposed to the spirochete will actually develop the disease.

How Can You Tell if Your Dog has Lyme Disease?

Here's the thing, even if a dog has been infected, the dog may not show any symptoms at all.

If a dog does show symptoms, usually the symptoms show up two to five months after the tick bite.

Unlike in people where the classic symptom is a red, "bull's eye" rash, dogs don't develop such a rash.

Instead, one classic canine Lyme disease symptom is the sudden onset of lameness, and quite often, that's the only symptom. You will notice that one or more of your dog's joints has become swollen and painful to the touch. The dog will limp, and may walk hunched over. The lameness may last for only a few days, although in some cases it may last longer or recur for months.

Other symptoms that an infected dog may develop include:

In more serious cases, an infected dog may develop severe kidney disease leading to kidney failure. In rare cases, the heart or the nervous system may also be affected. Understandably, these problems are more difficult to treat and can be fatal.

Diagnosis of Lyme Disease in Dogs 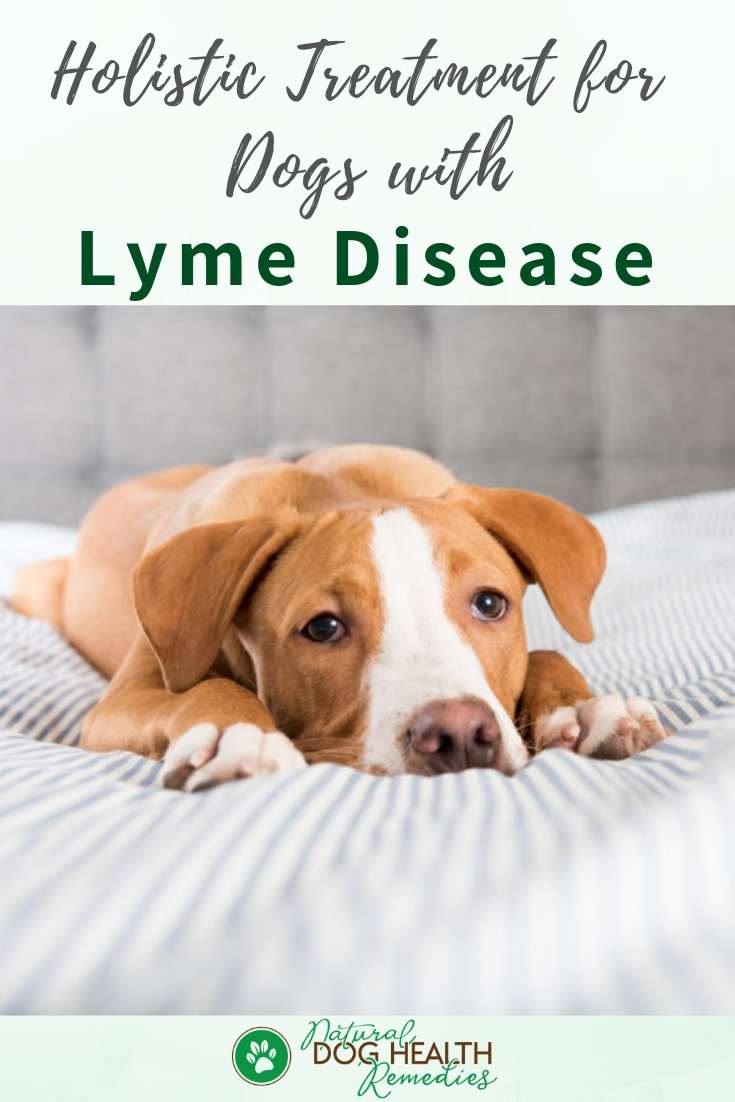 A blood test (4Dx) determines if a dog has been exposed to the spirochete.

If your dog is tested positive on the 4Dx test, don't freak out just yet!

If your dog is tested positive on the 4Dx test, your vet will do another blood test (C6 antibody test) that can distinguish between mere exposure to actual infection.

Of course, the vet will also base his diagnosis on other factors, such as the presence of clinical symptoms mentioned above.

Conventional treatment of Lyme disease in dogs is the use of antibiotics (e.g. doxycycline, amoxicillin) for a minimum of 2 to 4 weeks. Some vets recommend even longer treatment to prevent relapse.

Note that while antibiotics can kill off some spirochetes, they cannot get rid of all. The fact is, it's almost impossible to totally annihilate these spirochetes. They can seek refuge in the dog's muscle tissue, organs (e.g. heart, brain), lymph nodes, etc., and remain dormant for years!

These "dormant spirochetes" patiently wait for opportunities to regroup, build up, and mount an attack again - usually when the dog's immune system is weakened.

If your dog is on antibiotics, he may feel even worse for the first few days. Don't panic, it just means that the medication is working. Your dog is actually experiencing the "die-off reaction" (aka Herxheimer reaction), which occurs when the dog's body is having an inflammatory response to the dead spirochetes circulating in the bloodstream. After a few days, the dog's condition should stabilize and improve.

While antibiotics may seem to be an effective treatment for Lyme disease in dogs, some dogs may not be strong enough to stomach 2 to 4 weeks' worth of antibiotics! (e.g. dogs with digestive issues, older dogs, dogs with weak immune systems, etc.)

Also, some dog parents may not want to subject their dog to such a treatment.

Fortunately, there are alternatives - using homeopathic remedies, herbs, and supplements. Depending on the seriousness of the disease, you may want to use these remedies instead of, or in conjunction with, antibiotic treatment.

Using a holistic approach is recommended because while killing off the spirochetes is important, it is equally important to boost and support the dog's immune system. And that's where the herbs and supplements come in.

Let's take a look at some natural remedies that can be used to help fight canine Lyme disease:

to treat Lyme disease (in pets and people).

You can give this remedy to your dog if:

Dr. Tobin's protocol is giving one pellet of Ledum 1M three times a day for three days. He has been using this treatment protocol for over 10 years to cure over 1000 pets (dogs, cats, and horses) of Lyme disease.

For added "protection", some homeopaths also suggest an additional dosage of 1 pellet per week for 6 months after the 3 day-treatment.

According to Shirley Moore, a trained homeopath and founder of the humane society Save a Dog, it's best to dissolve the pellets first in distilled water. You can also add the pellets to your dog's drinking water, but not his food.

There are also some herbs that may help a dog with Lyme disease:

Many herbalists use this herb to help people infected with Lyme disease with good results. This herb is believed to be useful in fighting off the Lyme spirochetes. Its anti-inflammatory properties help protect the body from the toxins released by the spirochetes inside the body, thereby reducing the "die-off" reactions mentioned above.

The herb can also boost the immune system, and enhance blood flow (especially to the heart, joints, skin and eyes).

The good news is, Japanese knotweed root is safe for dogs to use as well.

In a study, it was found that some components in this herb could significantly inhibit the growth of the Lyme spirochetes.

According to Margi Flint, author of "the Practicing Herbalist", Teasel can be given to a dog with Lyme disease while on antibiotic treatment. The herb may help reduce the dosage of antibiotics.

Cat's claw can be used to alleviate some common symptoms caused by Lyme disease, such as joint and muscle pain, fevers and inflammations. It boosts the immune system at the onset of an infection.

Echinacea is a powerful immune booster. If taken at the onset of a Lyme infection, it can help strengthen the body, which in turn can be in a better position to fight off the infection.

Milk thistle supports, protects and detoxifies the liver, which is responsible for breaking down and metabolizing toxins in the body.

While being treated for Lyme disease, a dog's body will have to process loads of toxins resulting from the death of the spirochetes. If the dog is on antibiotics, the liver will have to metabolize the chemicals from the antibiotics as well. It's not difficult to imagine the added burden on the liver, is it?

Giving the dog milk thistle at a time when the liver is under extra burden can greatly help support liver function, and protect the liver from damage.

Consult with a Holistic Vet

If your dog is infected with Lyme disease, it is a good idea to find a holistic vet and discuss the best treatment option and protocol for your dog, based on the seriousness of the disease, the age and health condition of the dog, etc.

While a dog is being treated for (or recovering from) Lyme disease, it is important to keep his immune system strong.

Feeding the dog a natural, high-quality, balanced diet is essential. Read this page for more information on what constitutes a healthy balanced diet for dogs.

In addition to a health diet, some supplements can be used to further help support the dog's digestive and immune systems.

Prevention of Lyme Disease in Dogs

Prevention is always better than cure! Here are a couple of ways that can help prevent your dog from getting Lyme disease:

As mentioned above, infection usually doesn't occur immediately after a tick has bitten a dog, so be vigilant and check your dog at least once a day for ticks (twice during tick season or if you live in a tick-endemic region). Remove the tick immediately from the dog if you find one.

Use tick repellents on your dog (and yourself).

While there is a vaccine for Lyme disease in dogs, many holistic vets are of the opinion that it can cause more harm than good!

The vaccine is not 100% effective. What's more, it may cause unwanted side effects and autoimmune disease.

Instead of the Lyme vaccine, Dr. Stephen Tobin recommends using a homeopathic Lyme nosode, such as BioPure Lyme and Coinfection Nosode

, to prevent Lyme disease in dogs. According to Dr. Tobin, the nosode can better protect a dog from Lyme disease than the vaccine.

His recommended dosage is as follows: 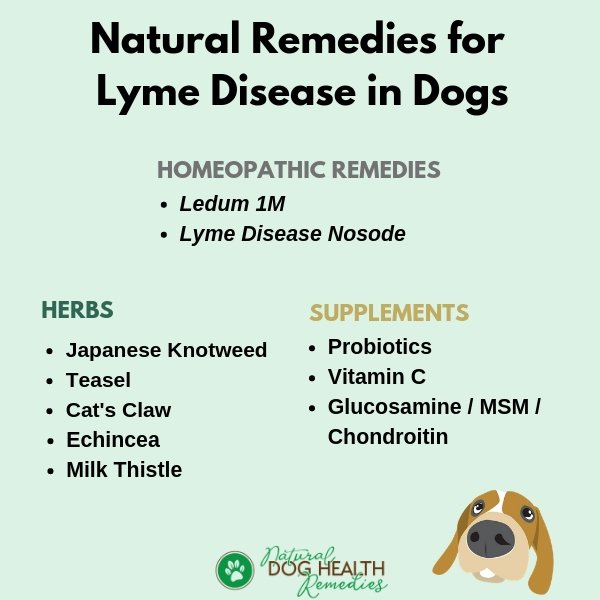