Flatulence in Dogs - What To Do with a Gassy Dog? 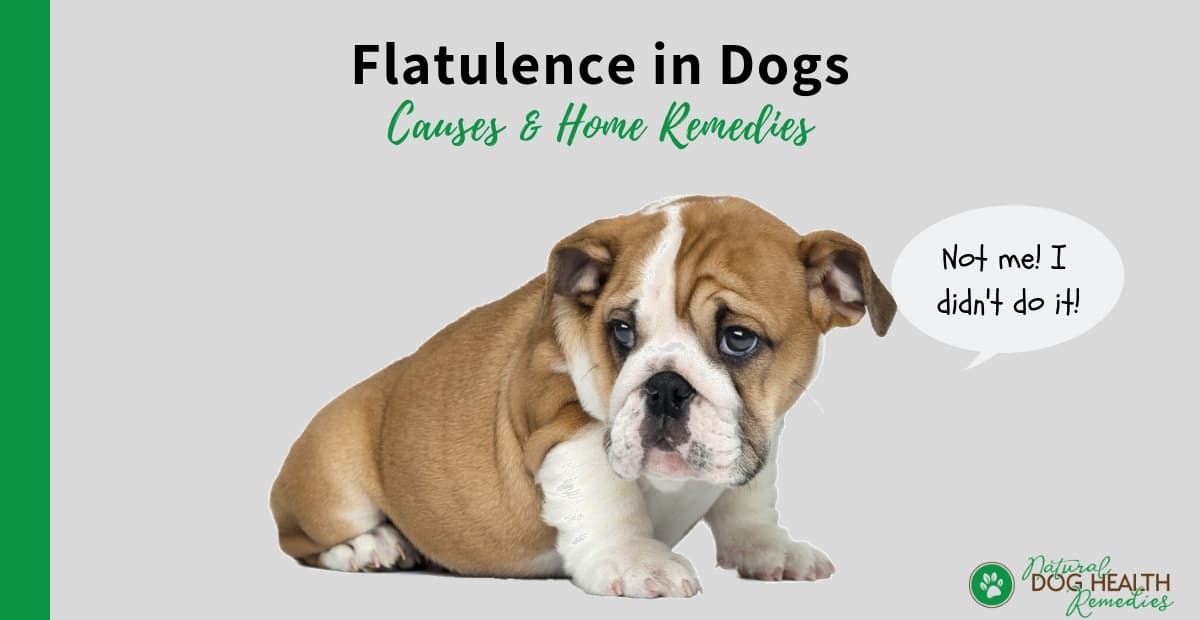 Just like humans, dogs have gas once in a while. This is normal (although not aromatic!)

Flatulence, best known as "gas" or "fart", is basically the accumulation of gas in the gastrointestinal (GI) tract. Most of the gas comes from swallowed air or from air produced by bacteria during normal digestion.

Much of this gas is absorbed into the blood stream, but some is not and "leaks out" through the rear end to become "gas".

While it is normal for dogs to be "gassy" occasionally, dogs who fart a lot accompanied by other symptoms can be an indication of some problem in the digestive tract.

Why is My Dog Gassy?

Some common reasons that make a dog "gassy" include:

Perhaps this is one of the most common causes of gas in dogs. Dogs eating too quickly tend to swallow too much air. The swallowed air passes to the intestines very quickly and in a more concentrated quantity.

If your dog gulps down his food, it is probably because he is very hungry. Try feeding him more frequently during the day in smaller quantities.

Another way to slow down a fast-eating dog is to use a special "slow feed" food bowl like these:

These bowls are designed to stop your dog from "wolfing down" his food. This can improve your dog's ability to digest and absorb nutrients from the food, and prevent digestive problems such as gas and bloating.

Another common reason why a dog is gassy is poor-quality, grain-based diets.

Many such diets supply the majority of their protein from non-meat sources, such as wheat and corn. Dogs do not have the enzymes to digest these non-meat proteins.

When food is not fully digested, it provides a rich source of nourishment for bacteria in the large intestine. The undigested portion of food will ferment, producing gas.

In addition, just like humans, eating certain types of veggies, such as beans, will also cause a dog to have gas.

If you suspect your dog has excess gas because of his food, try switching his diet to a high-quality natural diet that contains a higher percentage of meat-based protein. (Look for foods in which proteins from meat sources are at least 2 of the first 3 ingredients.) Very often, the "gassy" problem can be solved by a diet change.

Older dogs tend to have more "gas" than younger pups. As a dog ages, his stomach and intestines start progressively losing their muscular tone, resulting in distension of the stomach or intestines with gas or air.

Some health problems can also cause gas in dogs, for example: 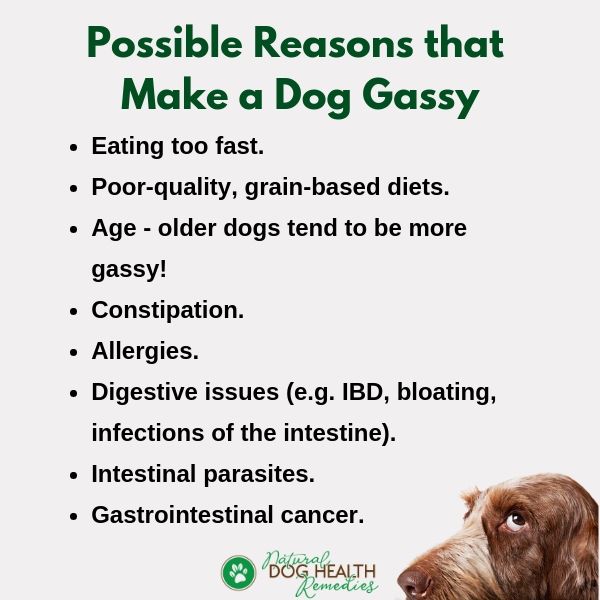 When is Gas in Dogs a Problem?

You should take your dog to the vet if your dog passes gas several days in a row and the condition does not seem to subside, or if flatulence is accompanied by other symptoms, such as:

Natural Home Remedies to Get Rid of Gas in Dogs 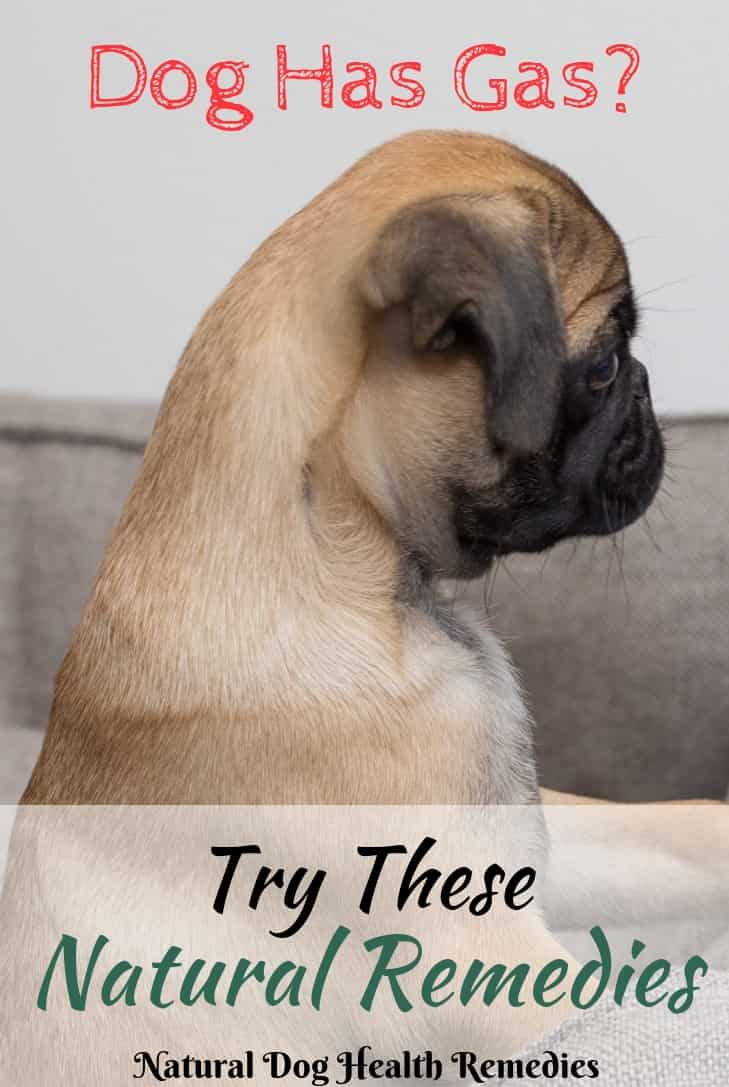 For the occasional gas, try these herbs and dietary supplements:

Herbs that are carminatives (herbs that relax stomach muscles and relieve intestinal gas) are helpful to stop flatulence in dogs. Here are some carminative herbs that you can easily and safely feed to your dog:

Just sprinkle some of these dried herbs on your dog's food regularly and both your dog and your house may become more aromatic!

Dogs that have excess gas very often have a sluggish digestive system. One reason may be due to insufficient digestive enzymes in their diets. Adding a digestive enzyme supplement to the dog's diet may solve the gassy problem.

Supplementing your dog's diet with probiotics can replenish the GI tract with good friendly bacteria that can help digestion and fix digestion problems such as flatulence.

A Combined Probiotic and Enzyme Product

This natural product contains both digestive enzymes, prebiotics and probiotics that all work to support healthy digestion and effective nutrient absorption, as well as to boost the immune system.

Other Ways to Control Gas in Dogs

Light exercise after meals such as slow leash walking helps digestion and bowel movement. It can also help work out the gas while you are outside.

Put the Garbage Bin Lid On

Yesterday's garbage may taste just as good to your dog as fresh food, but the gas resulting from garbage will be a lot smellier! If you don't want to put up with smelly gas attacks, watch what your dog eats. Don't let him eat garbage or too much table scraps.

References
C.J. Puotinen, Natural Remedies for Dogs and Cats (Keats Publishing, 1999).
M.L. Wulff-Tilford and G.L. Tilford, Herbs for Pets (Bowtie Press, 1999).
R.H. Pitcairn, The Complete Guide to Natural Health for Dogs and Cats (Rodale, 2005).
Did you know that honey can also be used for digestive problems such as gas? Check out this page for more information.
Home
> Dog Illness Symptoms
> Flatulence in Dogs